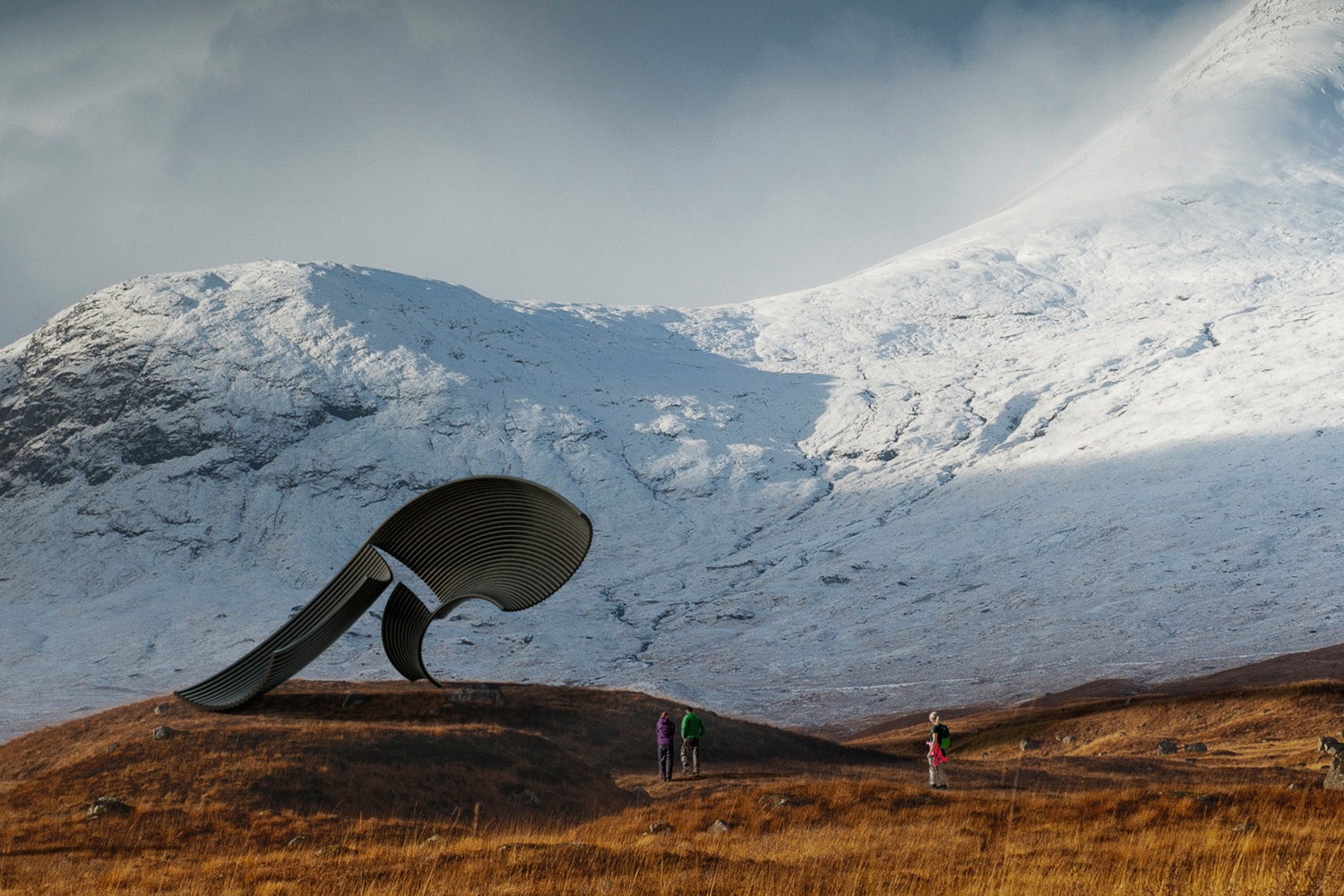 Render of a new sculpture I'm working on... 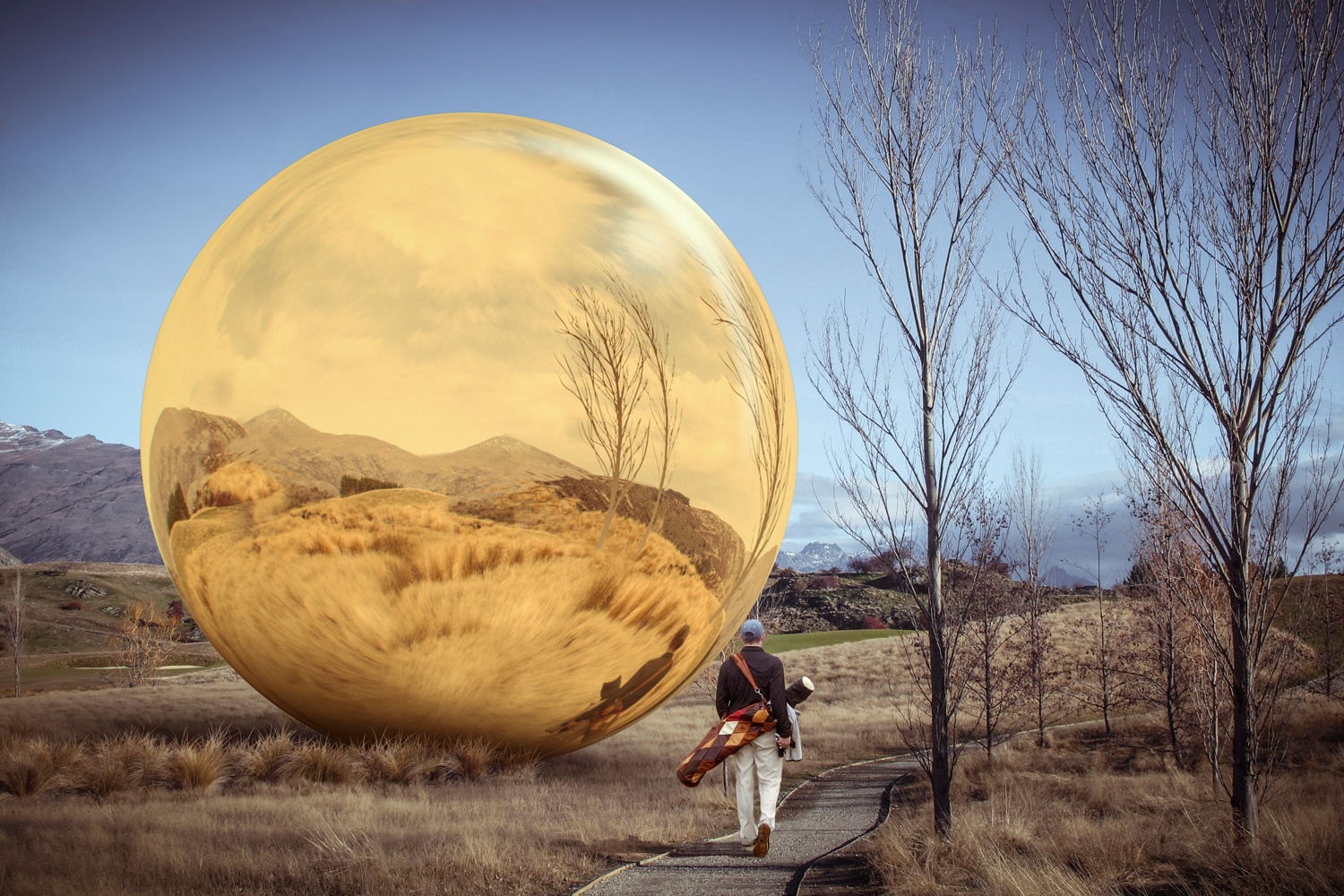 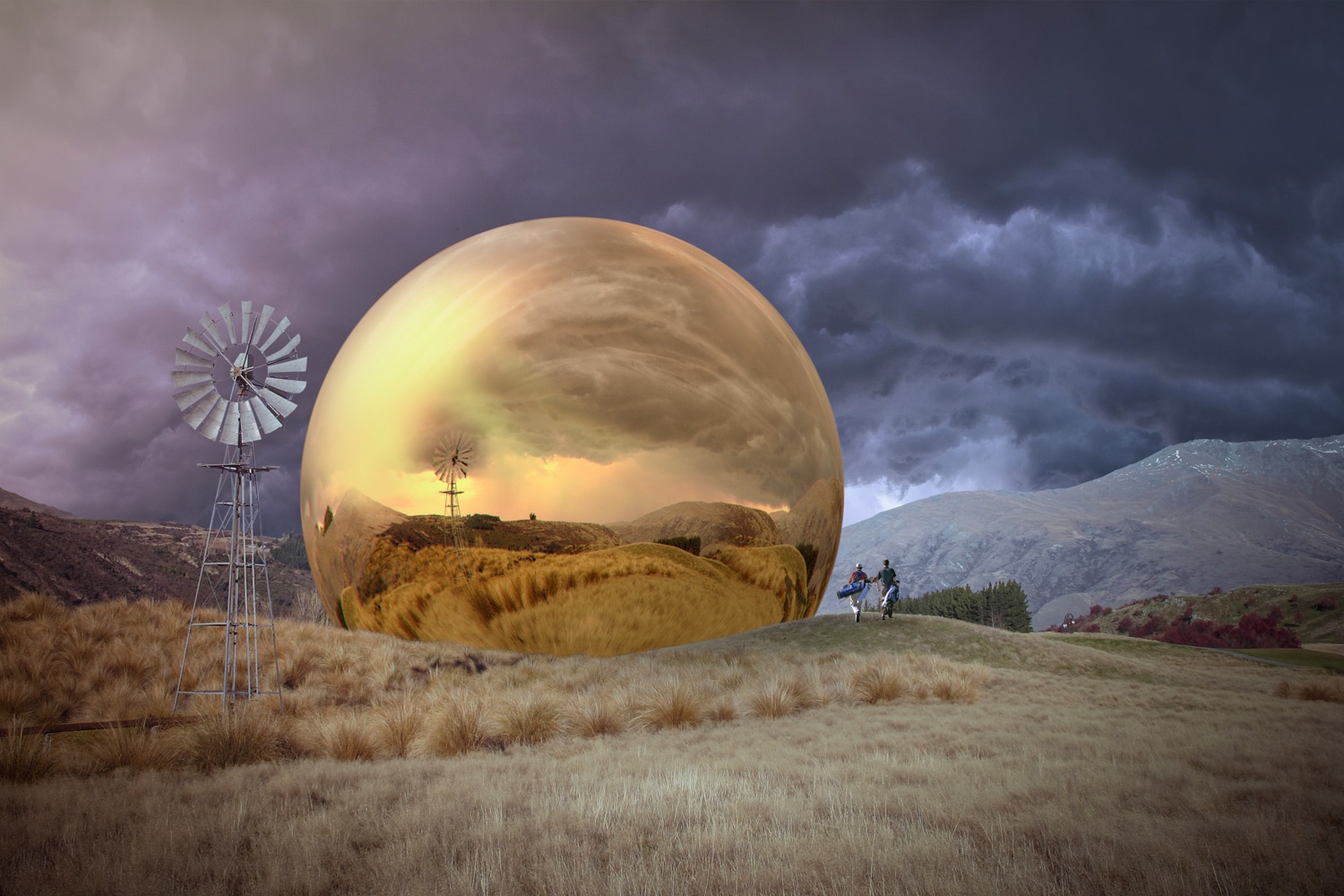 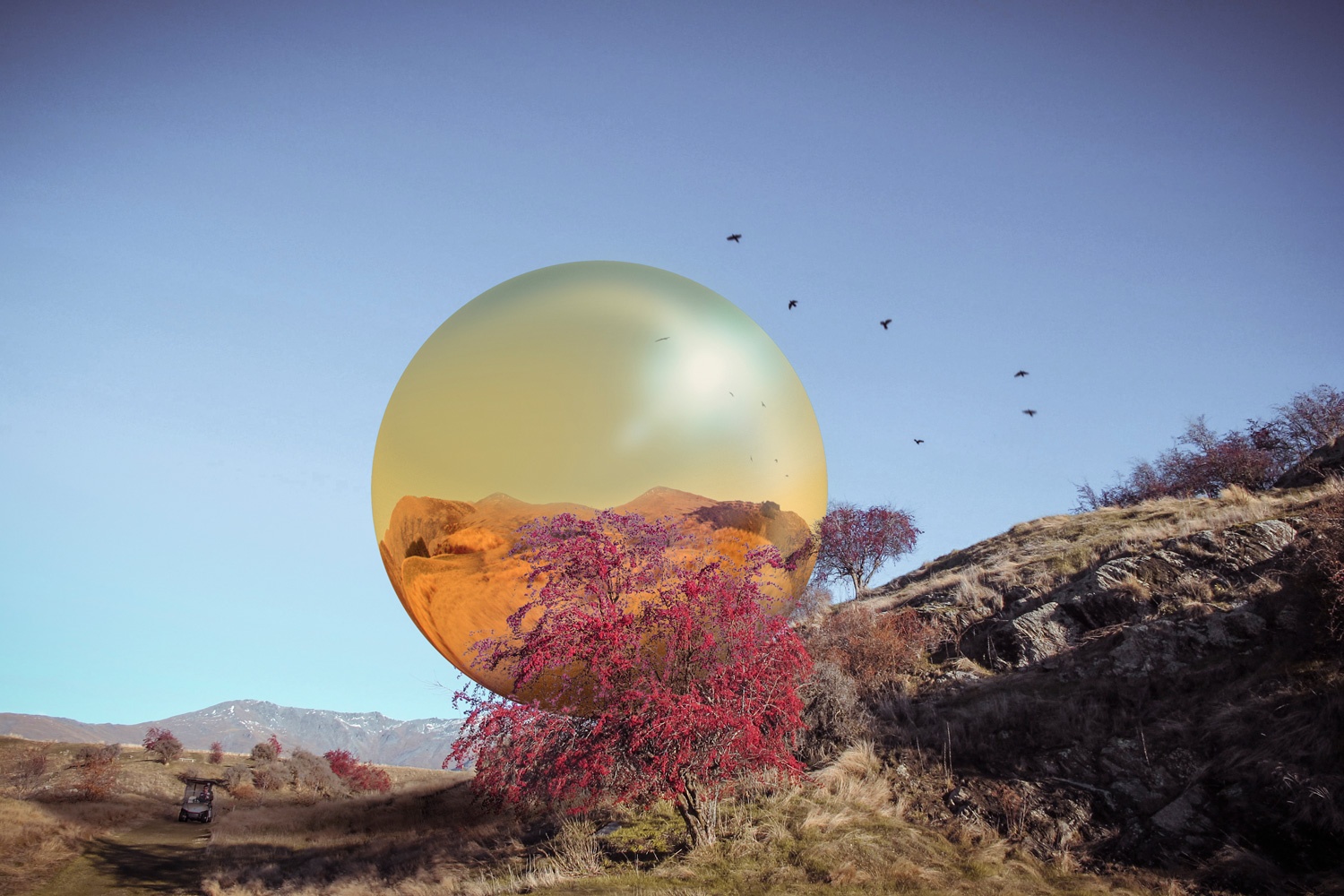 The sphere is an ancient symbol for the infinite and eternal universe. Gold is a source of beauty, incorruptibility and riches since time immemorial. Even the word “gold” has a wonderful spherical roundness in the mouth when spoken, echoed in the smooth metallic curve of the sculpture.
Imagine this grand philosophical monument nestled in the rugged hills like an extra-terrestrial interloper from a distant star cluster; a giant golden soap bubble reflecting those same hills imbues with its own rich, warm lustre, allowing it to become part of the landscape. All in one and one in all.

Goldsphere is site specific. It playfully alludes to the Michael Hill jewellery empire and to the gold mining and prospecting history of the Arrowtown area. The shape also suggests a golf ball, tying the sculpture to the purpose of the golf course itself.

Visible from a distance, Goldsphere offers an enigmatic and alluring accent to the surrounding vista. Imagine it setting off by the clear, bright winter light and fabulous autumn foliage Arrowtown is famous for. Up close it is a shining, minimalist reminder that there are more things in heaven and earth than dreamed of in our philosophy.

GoldSphere can be produced by Global Stainless in Taranaki, they produce work for Anish Kapoor. The sphere would be made in 6mm thick high grade 316 stainless, then polished to gold mirror finish.

Kinetic Pillar is an ever changing celebration of movement that echoes the work of American modernist sculptors George Rickey and Alexander Calder, and contemporary New Zealand artist Phil Price. Its restless mutability and gentle rhythms will mesmerise guests. It dances with the moves of a Tai Chi master or a Capoeira fighter.

One minute Kinetic Pillar is mysterious black monolith suggestive of the Stanley Kubrick 1968 movie 2001: A Space Odyssey. As the wind picks up its articulated limbs disengage to gracefully describe swinging balletic arcs in the air through its axes of motion. Next minute it is a stylised and alien tree, an abstract constellation of choreographed black squares like a flock of startled birds, or a prophet with arms outstretched to welcome the sky. That which appeared a solid and unyielding form is in fact in constant flux, as contemporary and variable as the Central Otago winds which power it.

The metamorphoses of Kinetic Pillar are commanded by the weather, binding the sleekly industrial sculpture to the local environment and the prevailing elements, capturingthe expressive and aesthetic immanence where material form, light and action in space intersect. It is movement rather than shape which is paramount.

The sculptural installation Birds in Paradise is a play on "Birdie", the term for scoring 1-under par on a hole, reflecting the The Hills’ function as a golf course and giving the structure specifity to place.

The formal components of the art work resemble highly stylised versions of birds in three pivoted sections at varying heights standing in a water hazard or pond. This alludes to New Zealand’s internationally celebrated native bird life and environmental beauty.

Starting from an upright vertical position, any breeze causes the birds to slowly animate, twist and bow with a serene, almost Japanese elegance. The stronger the breeze, the more cheeky character and energetic personality the birds adopt.

Depending on the posture of the birds in motion, the effect varies from smaller birds gossiping on perches to a family of tall and elegant wading birds. The sophisticated aesthetic is complemented by the reflective properties of the water they are installed in.

The effect is harmonious with the natural landscape and plantings, cultivating a pleasant atmosphere of peace and tranquillity among guests and form an attractive conversation piece. In a densely-planted setting they provide an unexpected and delightful surprise for a visitor to happen upon. 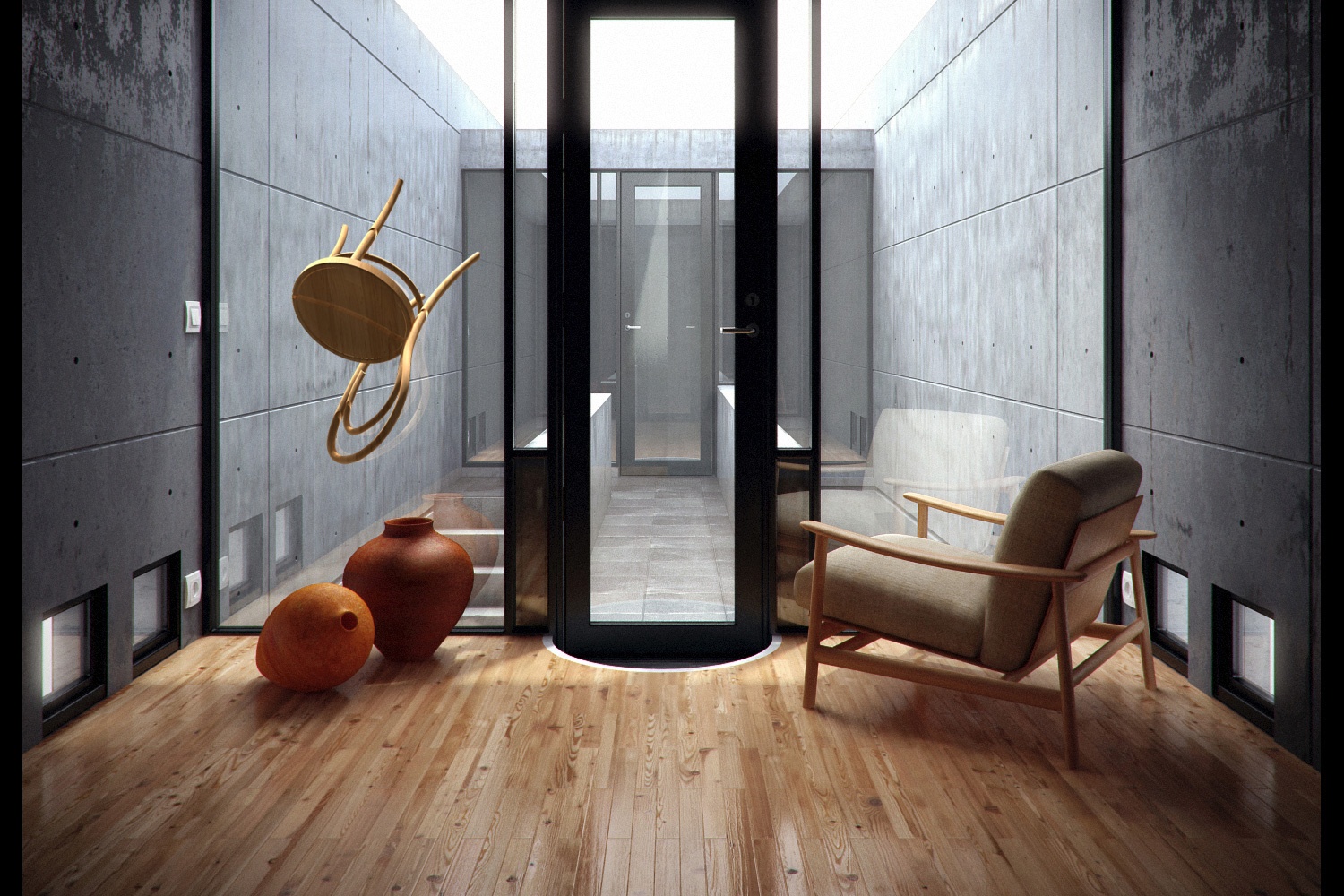 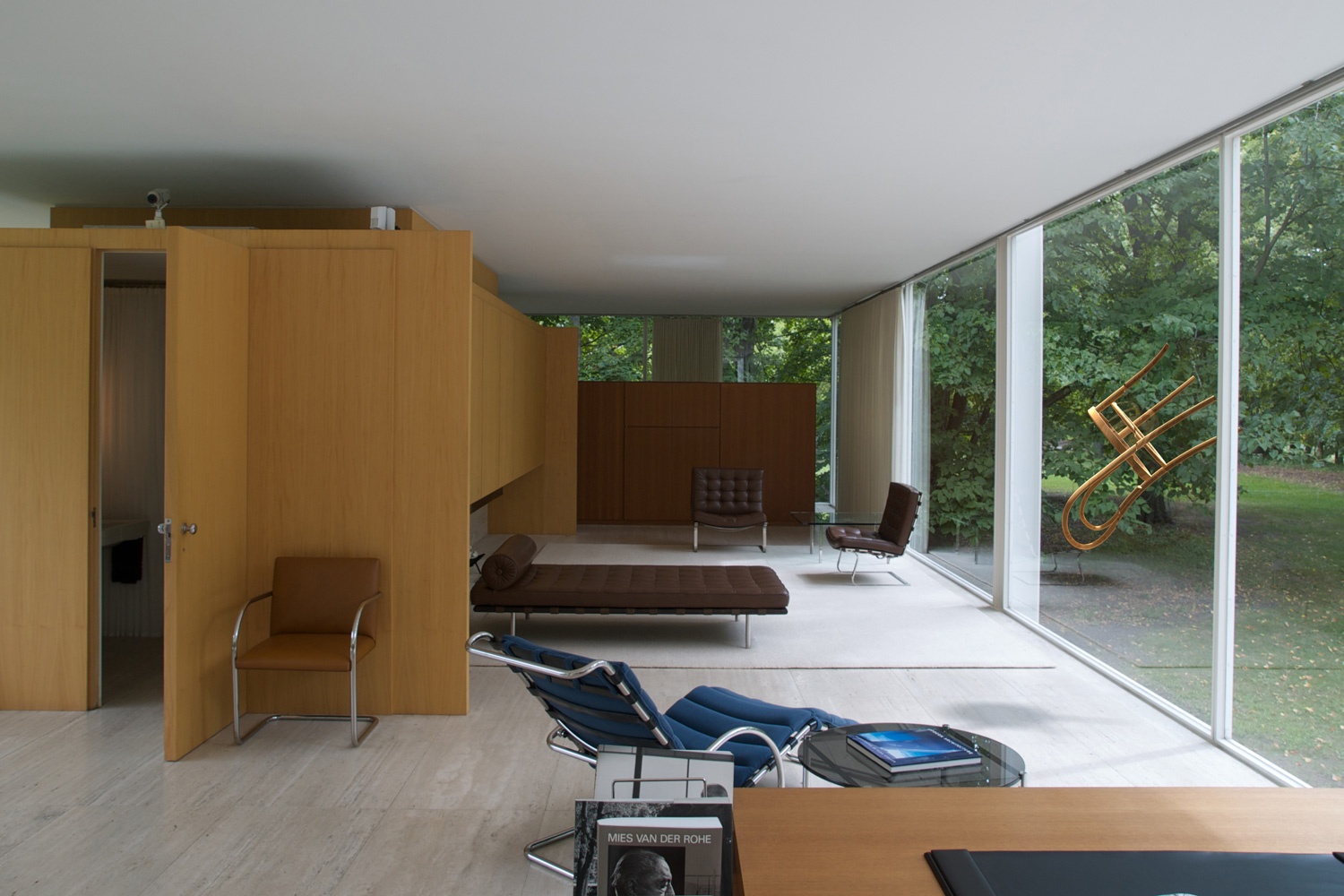 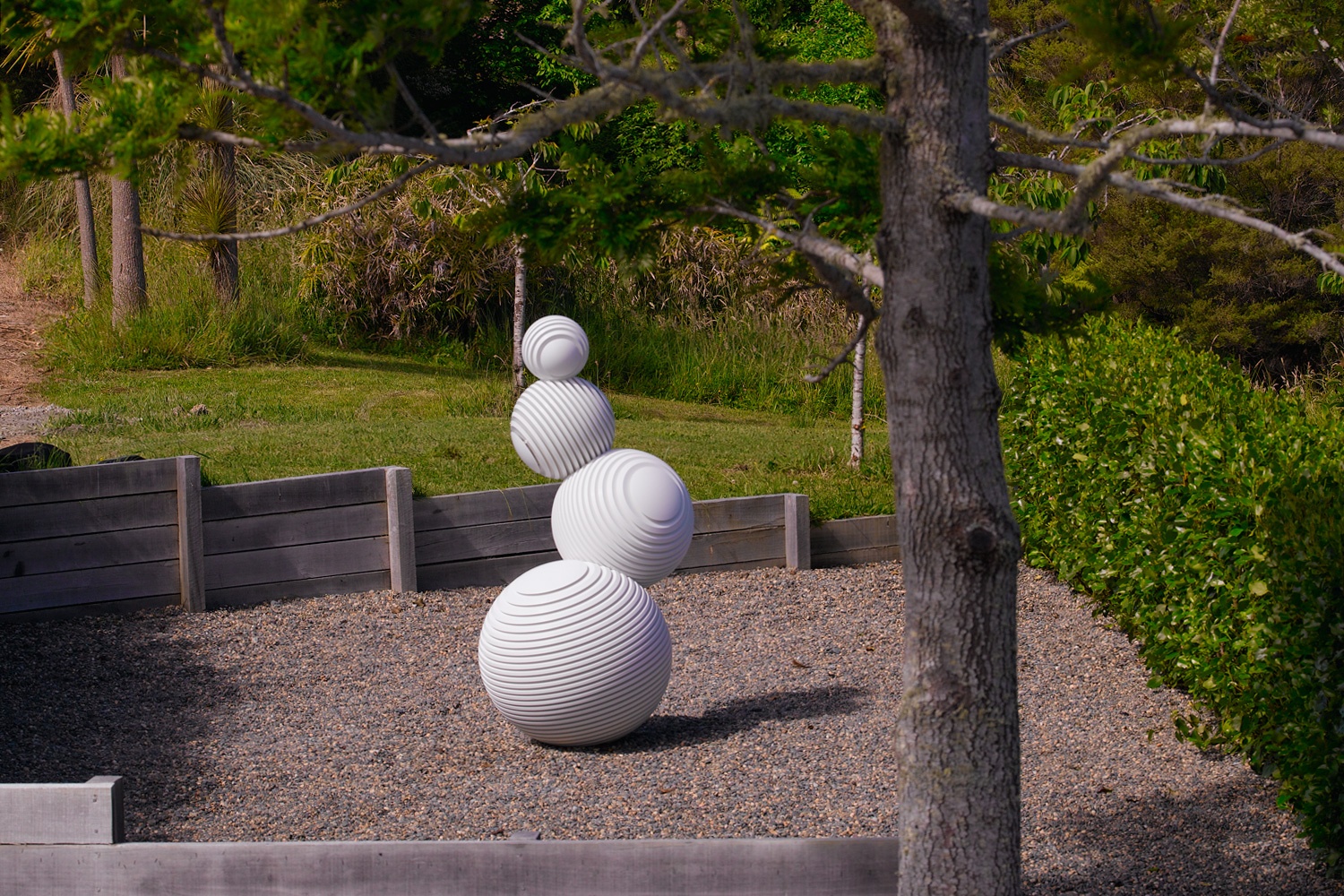 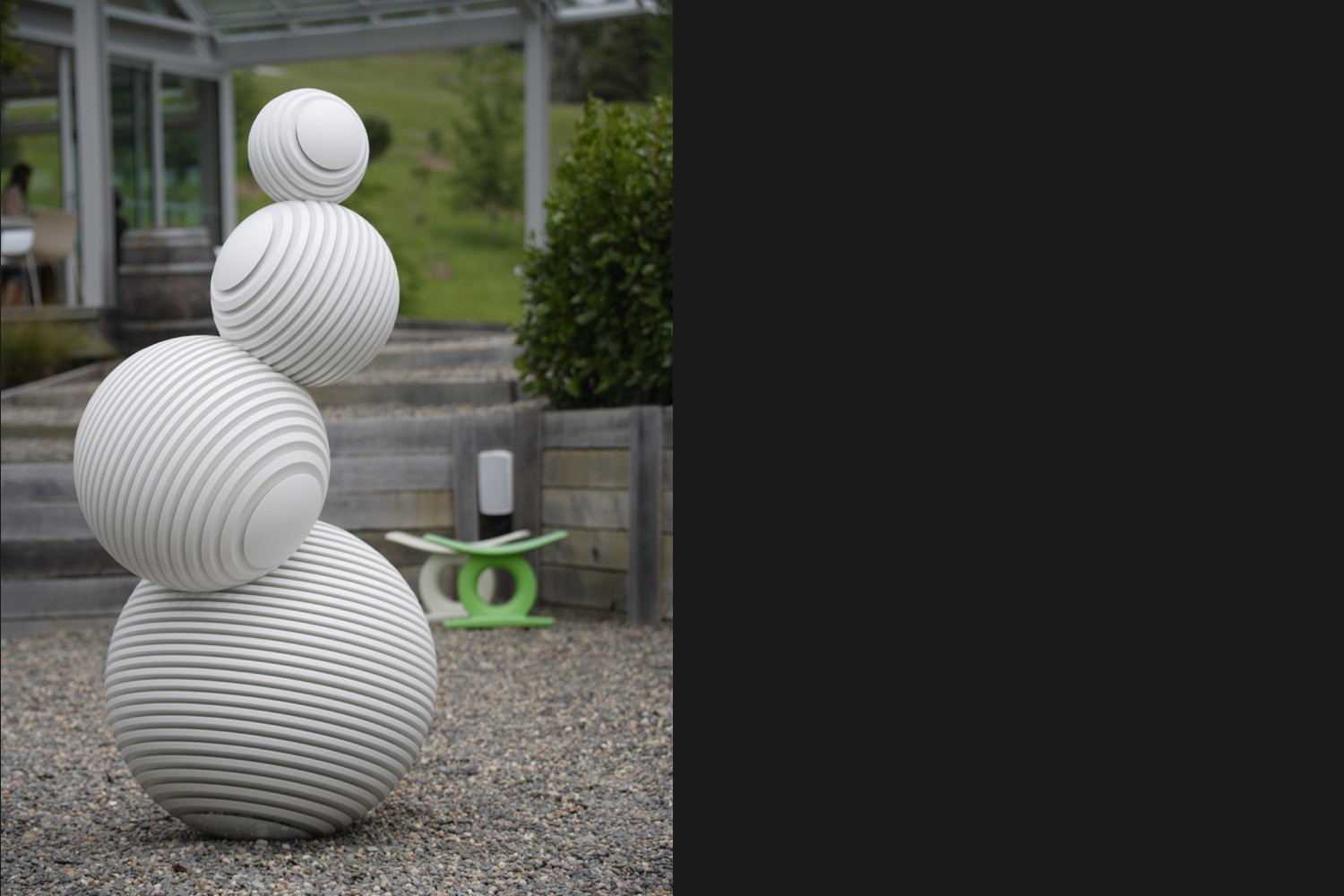 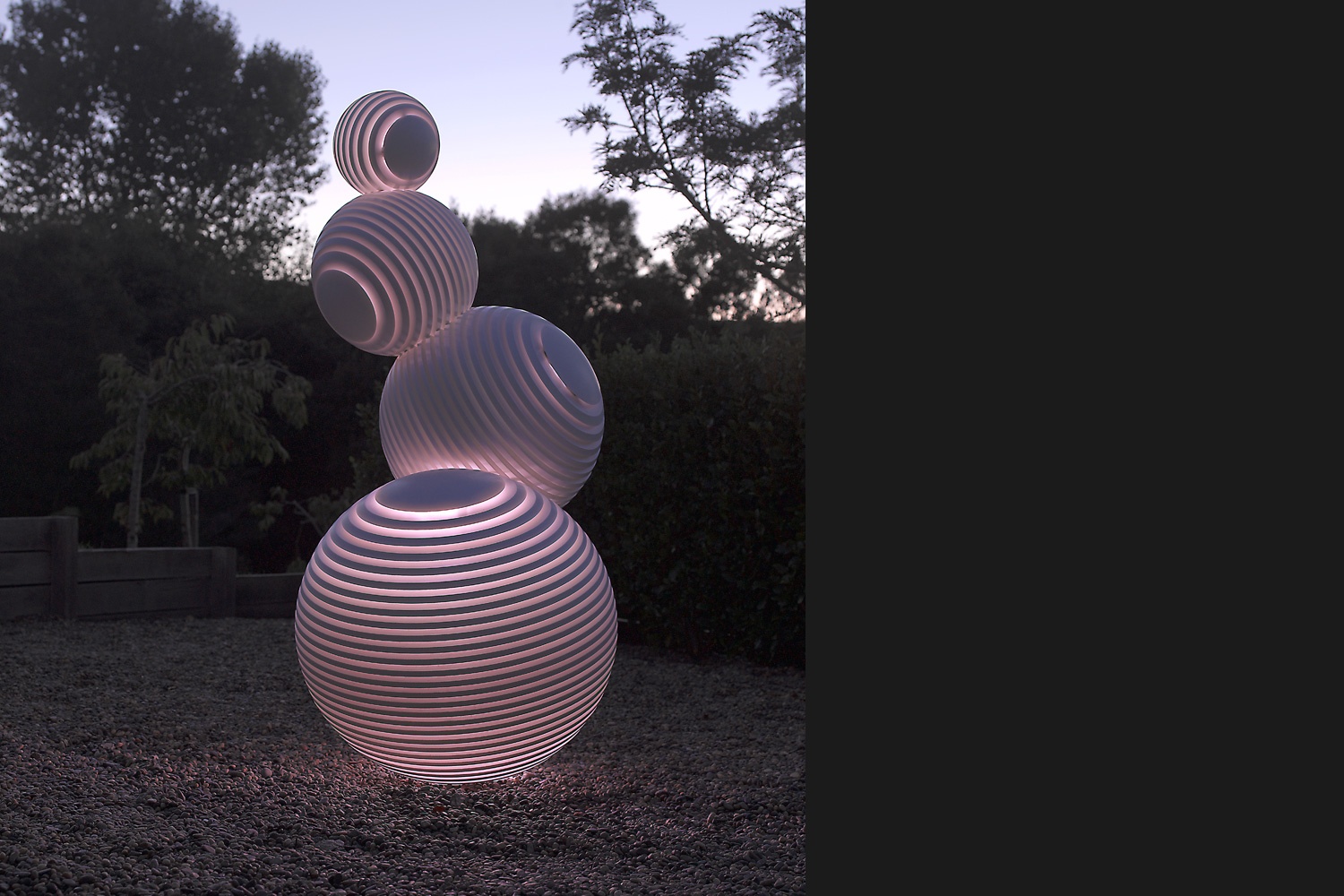 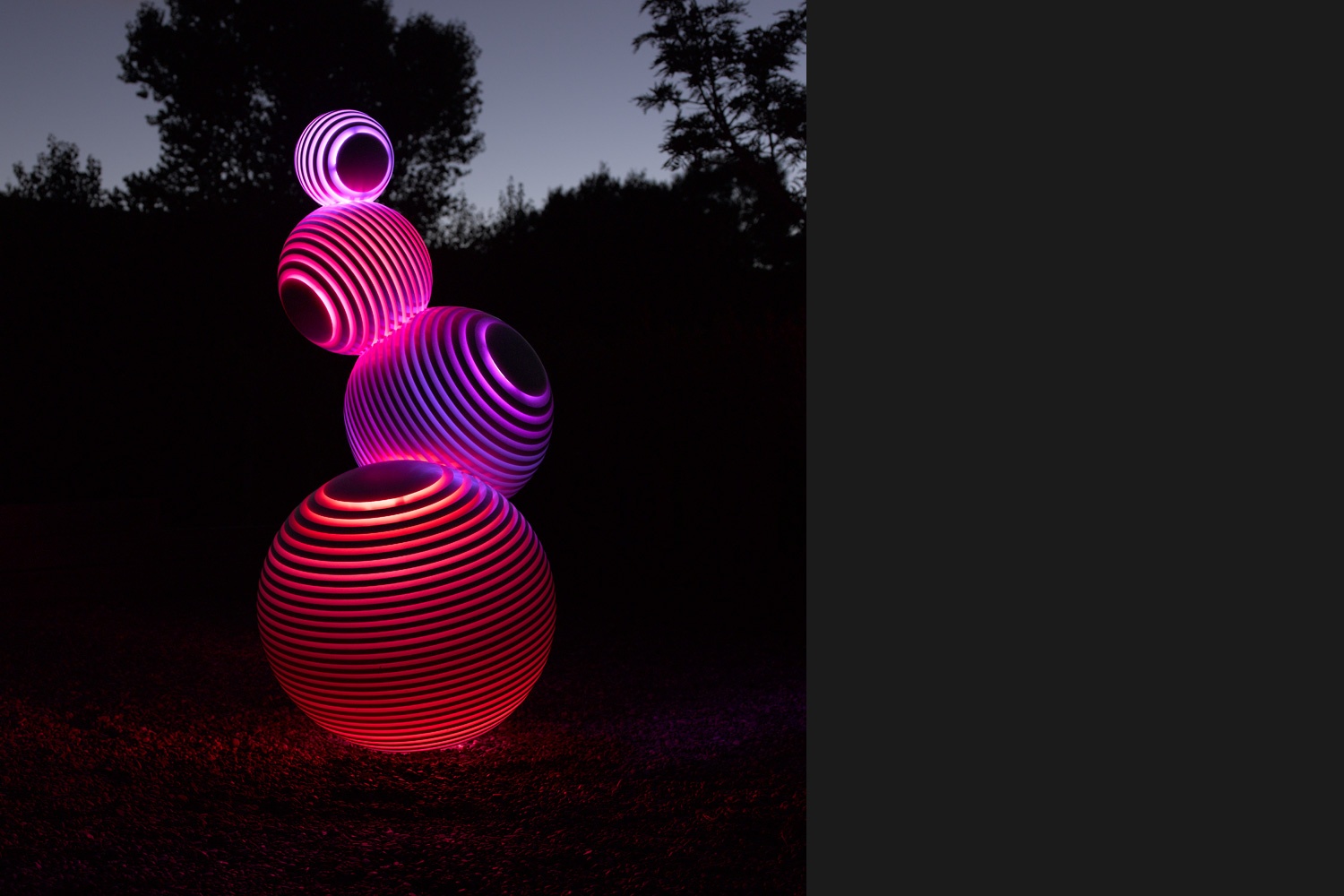